A packed room awaited a sale of great variety which began with some most unusual literature including a China 1933 postal atlas which reached £940. Sir Rowland Hill’s personal copy of “Her Majesty’s Mails” by William Lewins, 1864 sold for £500.

A remarkable assembly of Polar Mail, both Arctic and Antarctic saw fierce worldwide competition and featured a collection of entire letters to or from American Whalers which sold for £2,230; a 1903 cover from the Discovery Antarctic Expedition to the Secretary of the Royal Geographical Society made £1,060.

Turning to North Polar material, a 1901 Peary Relief Expedition cover from Greenland made £760 and a 1925 flown cover from the MacMillan Aerial Survey of Greenland reached £880. The 1926 Byrd North Pole flight expedition saw a pair of covers reach £1000 while the Italian 1928 Umberto Nobile Airship expedition and rescue missions to Spitzbergen saw exceptional interest with a cover from Italy to King’s Bay selling for £5150; the 1926 Amundsen Ellsworth Nobile Leningrad to Alaska flight saw a cover from Spitzbergen to Alaska reach £1400.

An unusual collection of proof cancellations prepared for the Colonial Office in 1948 saw those from Malaya and Singapore reach £2350 and the Trinidad group reach £450.

Turning to British Occupation of Italian colonies in World War 2, a pictorial set of Italian East Africa overprinted “British Occupation” yet not issued sold for £1,650 A Marc Pourpe 1914 flight cover from Halfa, Sudan to Cairo, sent to Lady Stamfordham in London made £3,650.

In Asia, remarkable early photographs from Hong Kong c.1880 reached £2,350, and a rare Labuan 1865 front to Manila bearing a combination of India and Hong Kong stamps made £9,000.

Jamaica saw a fine lot of railway covers with a 1916 Ipswich cancel selling for £820.

A remarkable holding of 1911 London Windsor airmail material saw a rare card flown in both directions sell for £2400, interest has been fuelled by Jeffrey Booth’s new book on this subject.

A cover from the 1919 Aerial Post during the rail strike flown from Glasgow to London at 2/3 rate sold for £400.

A remarkable example of the rare 1751 Perth, Scotland, Lamb cancel made £2000 while a most comprehensive collection of Heathfield, Sussex sold for £1,650.

A great holding of Northern Rhodesia material saw a 1963 Postage Due 1/- block of four imperforate vertically and horizontally between sell for £820.

Two Rhodesia 1905 postcards to Belgium, almost certainly from Belgian Congo, tied by Kalunguisi postmarks and taking 23 days to get to Fort Jamieson made £3600 while a 1910 parcel label from Mpika containing otter skins sold for £1300.

Southern Africa included an amazing Transvaal block of thirty 1895 Introduction of Penny postage missing three columns of vertical perforations which made £760 and a very rare Cape Town 1919 Peace Celebrations pigeongram which made £1525.

The day rounded off with a remarkable Hawaii 1894 paquebot cancel, ex Hosking collection, which sold for £700.

A strong room left with their purchases of amazing material and bidders await the next Argyll Etkin sale scheduled for Spring 2018.

Consignments of suitable material are invited. 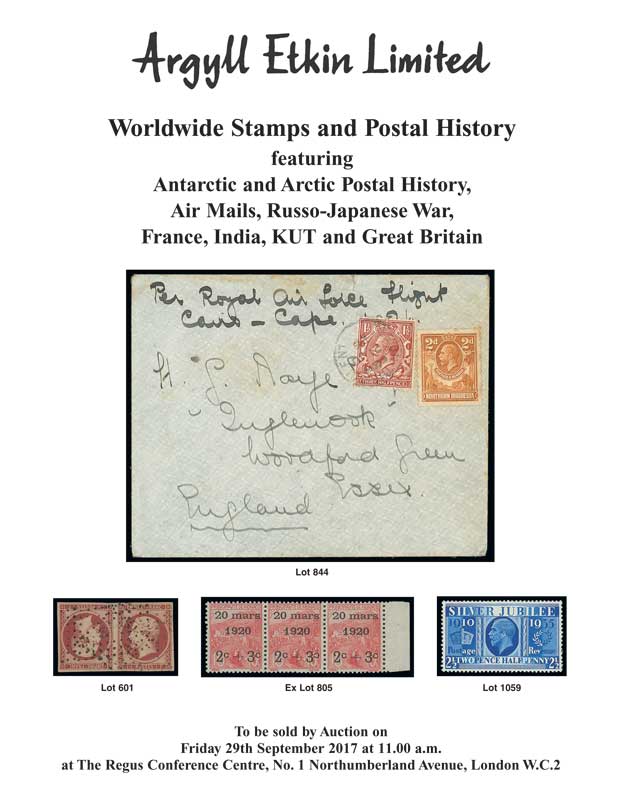